I have heard the ridiculous ‘plandemic‘ theory,  including one about a virus outbreak appearing in an election year. Or, that the US didn’t see this coming. 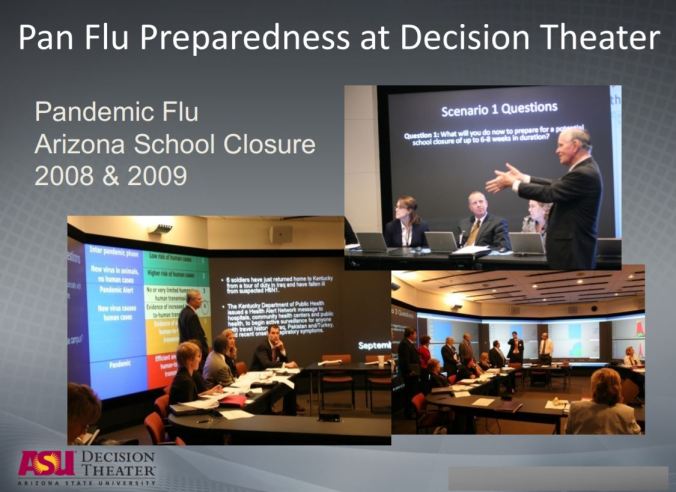 Well, in 2009, at ASU, I worked for an outfit that ran a 2-day pandemic planning exercise, with realistic scenarios. Elections were over. The participants were county health officials, school superintendents, infectious disease specialists.  People who would be called upon to make the tough calls, to safeguard populations, and schools.  Arizona State University’s WP Carey school of business was involved, as was the School of Health Policy and Management. But this was not what researchers typically call a ‘table-top exercise.’ This was a bit more realistic.

The location of this exercise was the Decision Theater – a visualization space that has a war room ambiance. (Fun fact: Decision Theater was used to movie as exactly that , where scientists wrestle with how to avert a catastrophe when an asteroid was heading to earth.)

Participants were presented with news reports, and data sets of unexpected scenarios: a virus entering the country through returning soldiers, outbreaks spreading to cities, and small towns, children infected etc. On the large screens in the Theater (also known as the ‘Drum’) our team created simulated news reports for each potential crisis point. The 2009 exercise, a follow up to the one in 2008,  was to be a test of how decisions would be made in an unfolding crisis.

Weeks before, our videographer, Dustin Hampton and I set up and recorded ‘news’ reporters, and edited story-lines that would track with the mathematical models that would be presented to the participants.  In one sense it was a fun exercise, even though the H1N1 Flu was a concern in some parts of the world.

I was in the room, and we were behind the scenes making the event look realistic. Cameras rolled, make-shift media were putting pressure on people to quarantine people, students, and shut down schools. I had not realized this but I had created two podcasts of the event, interviewing attendees.  They are a peek into the situation I describe.

This is not the only exercise of its kind that preempted the current pandemic. In May 2018 Johns Hopkins University ran a similar table-top exercise, that put people in a room to respond to realistic reports of a viral outbreak Watch the video below. It’s eerily similar. Even the date of the fictitious outbreak is so close, it shocked me when I watched it.

Below, is another interview we did with Dr. Robert Pahle who worked on another piece of software for pandemic preparedness.

One thought on “In 2009 we planned for an influenza pandemic. I was in the room. I recorded it in a podcast”