This morning I was sitting in the control room of a KJZZ, the local NPR station here in Phoenix, watching a live radio call-in show in progress. It suddenly hit me like a ton of bricks : a control room in radio is anything but.

(This happened when the guy in the control room was told that one of the mics was dead, even though all the buttons had been punched.) 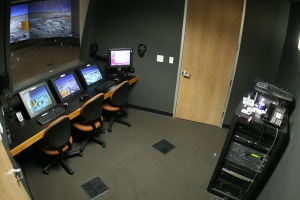 To this end, radio is a lot more elastic than we give it credit for. The best producers and hosts want you to loosen up and even ‘break’ the format. To me as a listener, that’s what makes it such a great experience, when it is not scripted all the way. When Bill O’Reilly stormed out of an interview with NPR’s Terry Gross, she lost control of the show, bit it made great radio. (She rebroadcast it.)  When the guests take over, something’s working.

So back to the studio. Before the show the producer, Paul Atkinson, told us to make sure we treat this like a conversation, not an interview. Think about that for a second.

A conversation, not an interview. Where have you heard of this before? That’s right, by those (like me) who promote social media tools. The phrase is actually ‘a conversation, not a lecture‘  heavily influenced by the Cluetrain Manifesto. Since 1999, this has been infecting other one-way media as well.

Yes, there are still talk shows like this and this, that are built around the cult of the show host lecturing -hectoring– the audience. Public Radio, on the other hand, has interactivity in its DNA. The callers can change the channel, but they keep calling in to change the direction of the show.

Just two random examples of where this radio virus has spread:

Sidebar: Since Sunday the 3rd was World Press Freedom Day, I would like to tip my hat to radio for being the medium that has brought a rich spectrum of voices into the conversation.