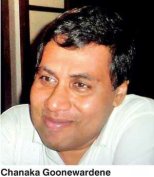 The network went down on Saturday the 16th June. It was more like a system malfunction when our dear friend Chanaka Goonewardene left us. Each of us – and our spouses, and our children, and our parents – have stories to tell of Chanaka. Not just Peterite stories but tales of banking, of spontaneous trips on trains and buses, of backstage events at the Lionel Wendt, of birthday parties, rugger matches, and job placements for school leavers…. the chapters about Chanaka and his involvement in people’s lives would fill a small library.

To say Chanaka was a doer is an understatement. He juggled so many projects the word multi-tasking was coined with him in mind. He never failed to call us on birthdays, or remind us of important days, to shuttle people around to events. If we wanted to know something or plan something we didn’t need Siri or Alexa – we would first ask Chanaka. When I met him a week before, he managed to say, “Machang, you have my mobile. Call me!” I said I would; Like most of us, I needed to figure out so much, but could not make that call.

And on top of all his accomplishments, he was a truly faithful Catholic, supporting every church and priest he came into contact with. I like to think he formed his own ministry. God loaned him to us as an evangelist, an example of what but means to love our neighbour, and as an unassuming friend. The lending terms were short and seemingly unfair. But in his short span of time, the dividends snowballed. Chanaka accomplished what would otherwise take several lifetimes.

Today as I write this, soon after we laid him to rest, I am sure St. Peter must have been thrilled to have Chanaka back home – to set up and manage that eternal network we could all plug into.