Just got back, after what seems like a whirlwind book launch. 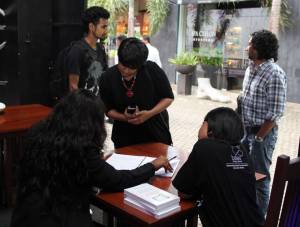 I’ve had to use the quote marks around ‘book launch’ because it was not originally planned that way. A series of events, coordinated by some of my friends at the last moment was beyond my expectations.

Those who made this happen included:

While I got to talk of some of the most timely topics covered in the book — Transparency, for instance– I got to meet some very smart people changing the game of marketing, media and communications.

Social Media, which has been on the back burner for many in Sri Lanka (some say it still is, but that’s a debatable point) is being embedded in so many places it was hard to keep up. More on this in a post, later.

One thought on “Thanks for supporting the ‘Book Launch’ in Colombo”