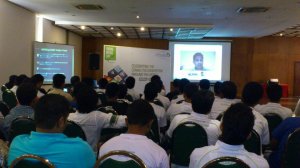 Today in Colombo the tech and business community attended Social Media Day, a Mashable-coordinated event, worldwide in which 511 cities participated

Two days ago, they held another parallel event known as Refresh Colombo.

One of the organizers noted that the hash-tag #SMDayCMB, which had begun trending regionally (as a ‘tailored trend’) validated the fact that there was a highly engaged community now. Speaking of the community, it’s got the right volatile mix for innovation. One newspaper reported, it was a confluence of “hackers, bloggers, coders, geeks and geek lovers, journalists, techies, entrepreneurs and venture capitalists.” Note: the absence of one group here – politicians. In post-war Sri Lanka, steering clear of politics appears to be a well-honed skill.

One of the highlights was a video-link up with Jehan Ratnatunga in California. Jehan is the person behind the comic YouTube skits. Fittingly (for this social media savvy audience) he explained how he landed a job with YouTube because of his hobby.

Watch this presentation by two of the smartest young entrepreneurs who understand not just technology, but how grass-root change and politics works at a fundamental level.

Watch the whole thing (it’s 25 minutes) because the best discussion is toward the end.

One thought on “Social Media and innovation surge in Sri Lanka”