Why is it that people who ride public transport don’t do a lot of talking? But give them a wi-fi connection and they’ll be chatting with a lot of others.

So when I saw a post  (from Barbara Gibson) about London cabs using Twitter, it got me thinking. 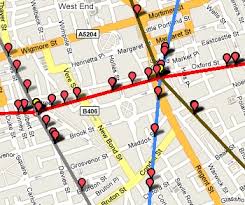 What if Twitter becomes a conversation starter on subways and trains? Already, there’s a head start in this direction among FourSquare users. It’s easy to discover like-minded users in a restaurant or public event.

But to get back to cabbies. If branded cab companies are letting customers order a cab with a  tweet, it’s not too difficult for cabbies such as @cleanaircabphx or even new services such as RideCharge @taximagic to create ad-hoc networks so that passengers might find some common interests within a certain geographic region.

Buses and Subways could be even better in this, considering they have fixed routes and predictable (and well segmented) passenger demographics.

The point of all this is not to encourage more commuters to ignore each other because they could have some wonderful conversation with someone in another bus, another cab. But the ideal situation would be if commuters start connecting with people in the way it used to be –by finding common, topical subjects worth having a conversation about.

But this one’s more of a directory of blogs.

And getting back to micro-blogging, here is a parallel. An aggregation of Tweets from Tube commuters.