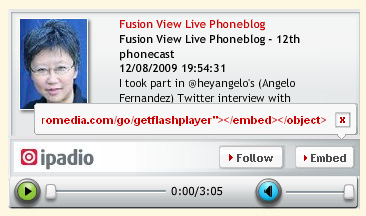 I had never heard about iPadio, until I stumbled on a podcast-like audio comment that had been recorded by Yang-May Ooi, on her Blackberry, commenting on me!

It had been recorded soon after she left a Twitter interview I had asked her to join, with Silvia Cambie. More about that and their book, here.

iPadio is a nifty solution. It enables what is techniclaly called Phone Blogging. All you need to do is talk on your phone by calling a toll free number and using a PIN, and it live-streams the audio comment directly to your blog !  Nothing to download, too. How neat is that? When you listen to her comments you get a sense of the immediacy and spontaineity. This could easily be turned into a longer podcast. And because it was being streamed live, I could have been listening to it while interviewing her co-author — thereby creating an interesting feedback loop. Apparently there’s a way to post the audio file to Facebook, as well.

As Yang-May observes (since had been followed and participated in the Twinterview on her phone) these are the early manifestations of multi-channel, real-time communictaions. It also shows how easy it is becoming to connect the dots between different forms of communication.

I am testing it out this week. If you have used it, or a similar service, leave a comment. I would love to pick your brains.

One thought on “Connecting the dots between interview and podcast”