You’ve heard the adage, “a lie can travel halfway around the world before the truth can get its boots on.” 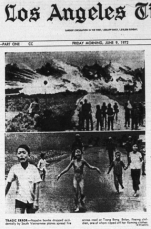 In the absence of fact-checking, we cultivated scepticism. It’s easy to blame our epidemic of fake news on the Russian trolls, and geo-politics. But truth is, half-truths and conspiracy theories circulated before social media arrived on the scene. Some even embedded themselves into the pages of history. Here are two:

Have you heard the one about Black Confederates? It’s a ‘story’ of how 80,000 black soldiers supposedly fought for the Confederacy. This is, as the Civil War website calls it, shoddy facts that’s were “repeated, amplified, and twisted” to become credible to some, just because the story fit their agenda.

Or the story of American planes dropping napalm in South Vietnam? It surrounds the Pulitzer prize-winning photograph, taken by Associated Press photographer, Nick Ut on June 8, 1972. That too, we are informed by Joseph Campbell, was a myth. The photo was accurate. The story was not.

Which brings me to how do we teach fact checking to young people ?

Until a few years ago some made Wikipedia the culprit. But even before that there were stories circulated via email, that travelled through an unverified friend-of-a-friendsnetwork. They contained dubious facts no one bothered to fact check. Fast forward to now, and we like to blame the trolls.

How easy it is to blame someone else when the onus ought to be on us.

One thought on “Long before fake news, we had half-truths”