Today Don Wilde, former Intel engineer, and FLL robotics coach/judge, was here to show our students a different side of programming – the Arduino board.

Don talked about how programming has been invading almost every part of our lives, from cars (which house dozens of computers), and houses to businesses, and libraries. (This session was fittingly held in the library – and I mentioned how students today self-check in and check out their books with a scanner and software).

He also stressed the point of how engineers are needed to design robots, and for online stores, casinos and satellites to function. “Highly-paid work today, whether it is in entertainment or communication needs engineers and programmers, and you could be one of them,” he said.

Don then demonstrated one of the devices he had put together for this, using a off-the-shelf Arduino Uno board. He connected a series of light, touch and sound sensors to show how this plug-and-play device worked.

By way of comparison, he talked about the Lego NXT robot, itself a micro-controller, with which many students in both 5th and 6th grades are familiar. We have had a robotics program in the school for the past 6 years. Thanks to Don, I have become interested in introducing Arduino to my class. Perhaps someday, we will have programming as a regular class, rather than an add-on to the curriculum! 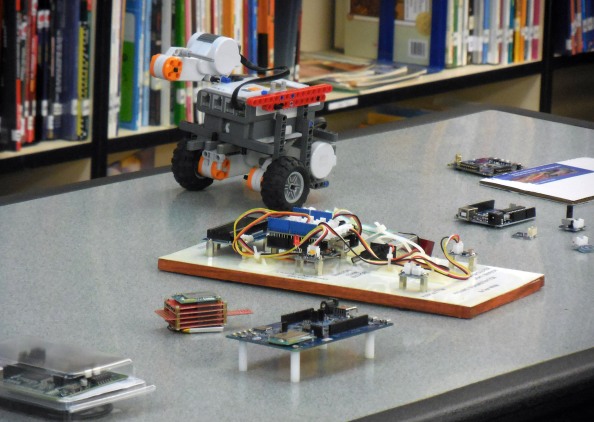