Yesterday I brought back our Technology Speaker series for the new semester.

What better way than to start off with a Googler, Patrick Krecker. It was timely as I had just completed teaching units on the roots in the Net. How none of what we access on the Web (or Google) would be possible if not for a man named Tim Berners-Lee.

Web history aside, Mr. Krecker responded students questions. Pointed questions that let him take on some hot-button issues that come up for discussion in my class. Such as What does Google do with our data? Why is there so much hacking these days? What’s ransomware?

Patrick talked about security holes, and the ongoing pursuit hackers and the role of ‘white hats.’ I was glad he personalized what coding in his job involves (He says has written about 200,000 lines of code) given that coding is making its way into many schools now, to get students better prepared for what lies ahead.

As for me, I learned new terms and concepts, too. Things like ‘double spend,’ ‘deprecated software‘ and something known as ‘cross-site scripting‘ which refers to the injection of malicious scripts or code into ‘trusted’ websites.

Patrick has a gift for explaining complex ideas with metaphors. If you like to listen in to his conversation with my students, here’s a link to the video, which is also on my class website.

Listen to the ‘Radio 201’ podcast of this event:

Patrick and I used to work at Decision Theater, at ASU about 11 years ago. It’s wonderful to see how far he’s moved along into a field he was always passionate about. Thank you Patrick for this wonderful experience in my class this week.

As Google doodles become more interactive it’s fitting to see it launch Hour of Code with a drag-and-drop doodle. It’s their first Coding-based doodle. Have you tried it? It’s on today’s Google landing page.

Worth reading: A description by MIT’s Champika Fernando, who was on one of the 3 teams that built this doodle.

Hour of Code runs through this week, which is also Computer Science Education week, and the anniversary of 50 years of programming languages. Scratch was developed at MIT. 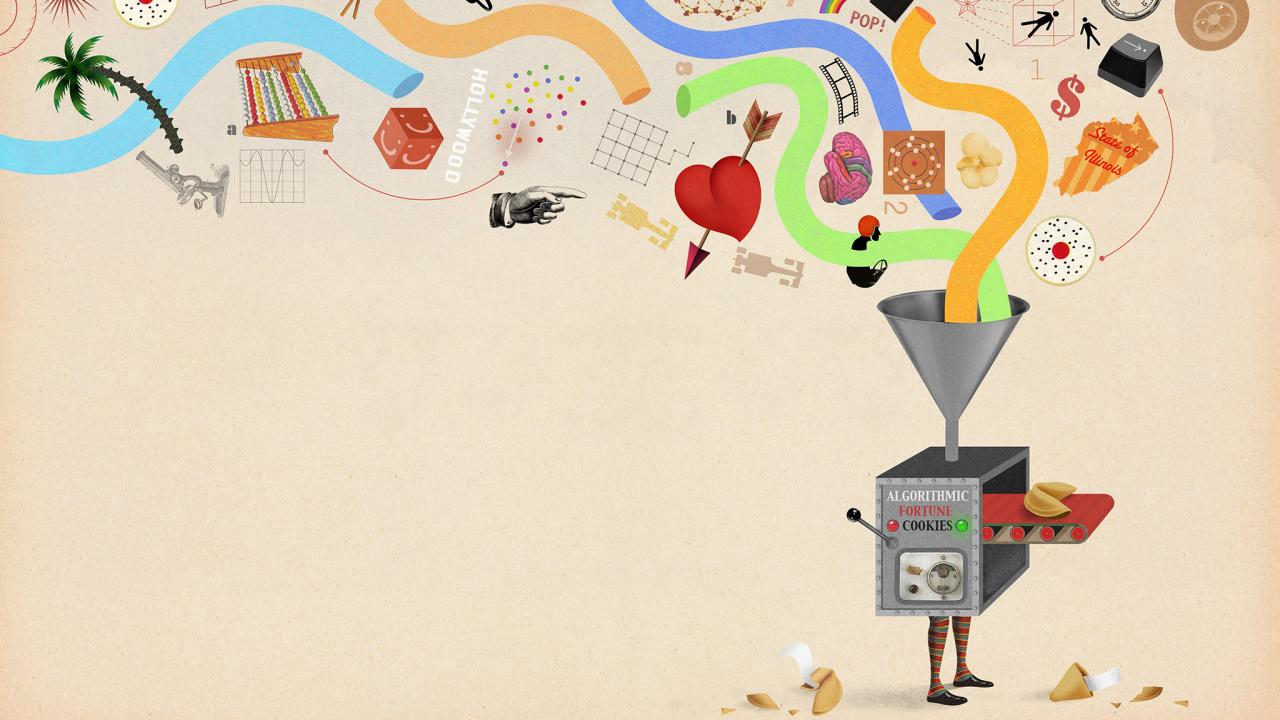 It’s hard to pinpoint when the word ‘data’ slipped into everyone’s conversation. Was it around the time we became aware that search engines were using data to understand user behavior? When data became their currency for pricing ads?

Data gathering amounted to accountability. data bestowed scientific accuracy. In some of the industries I used to be in, we had sexier terms: Metrics, and Analytics. (Combine the words to give it an aura of science –call it Data Metrics!) If you want to get more geeky, we also called some data ‘KPIs‘ – Key Performance Indicators. Today, hardly a week goes by when you don’t hear of Source Data, Meta Data..and the mother of all data we know as ‘Big Data’.  And  this spilled over to all other sectors. So it’s no wonder we hear phrases such as:

What happens when you don’t treat people as data? My wife has been teaching Montessori for the past, say, 28 years. The Montessori method does not use report cards. No data files. No spreadsheet to forward to the preschool the student will move to. But on any given day, she has what some might call ‘data’ in her head. Specific ‘performance indicators’ about each student. Montessori teachers know exactly at what development phase a child is, whether he/she is moving from Number Rods to more complex math to grasp the units, tens, hundreds, and thousands. The child is not a piece of data, as there are more holistic considerations.

Which makes we wonder: Are we data driven or just unthinkingly data obsessed? Nicole Laskowski quoting a Gartner study, thinks we are the latter:

Metrics and innovation don’t always mix. In fact, according to the analysts, having a singular focus on current performance metrics can create what’s known as “analysis paralysis,” where so much time is spent analyzing the data that a decision never gets made and risks are never taken.

It’s not the Tech companies’ fault. We simply assumed we could all run our lives like the Google’s of this world. Speaking of which, few know that Google’s founders, Larry Page and Sergey Brin were Montessori students. I’m willing to bet that their teachers had absolutely no metrics to indicate that they would become the founders of a data-driven culture. Or maybe they did – they just didn’t call it data!

It’s always good to keep an eye on what Chamath Palihapitiya is up to. He has been building a team of ex-Googlers, and is supposed to be after the next generation of computing. A $10 million startup, to be sure!

This could signal a lot of things, depending which pair of lenses you put on. It probably has a lot to do with AI – Artificial Intelligence. For instance he hired away eight of the ten people at Goggle working on a secret project involving a chip with AI. He has poked fun at Watson, the IBM cloud-based machine learning application.

Watson, as you might be aware turned tables on Jeopardy and Go (the 2,500-year-old game), but has machine learning entrenched in many sectors from genomics to industrial safety. Google’s machine learning project, known by its bland name, Tensor Processing Unit (TPU), is underway.

Pahlihapitiya talks of ‘probabilistic‘ software that is changing how we depend on devices – a great shift from ‘deterministic’ software based on “if-the” sequences. Watch how he explains how machine learning and II is transforming, and will up-end computing. I bet Watson took in every word of this.

While we have been obsessed with Mars, a big project has been underway to revisit the Moon. This little guy below, a Rover being tested by TeamIndus (India), is small compared to some of the Mars Rovers. It weighs just sixteen and a half pounds.

Google created an XPrize challenge, known as Lunar XPRIZE, with a $20 million prize for the team that could do three things:

Five teams are in the running: Israel, US, Japan, India and International team.

Google is known for it’s ‘Moonshots’ –from balloons that could beam down the Internet to remote parts of the world, to autonomous cars, to cancer research. And of course robots.

And it’s being sponsored if you will, by Google.

Just got back from the ISTE 2016 conference in Denver, and it’s hard to decide what stood out more: The technology, or the practices.

HARDWARE: Being a tech teacher, indeed the tools were mind-blowing. From the simple Digital Storytelling hacks, and wide range ofgaming technologies, to Makerspace ideas such as conductive material, to Virtual Reality, and Robotics. (More on robotics in a later post.) VR seems to have matured since 2014, and mini robots –like the Sphero, here — were practically running over our feet. OK, I actually took the challenge and drove one of these across the floor. They’re practically unbreakable, too!

SOFTWARE: The software definitely made me do a double take, when it came to programming languages, and ‘kits’ to simplify the learning curve. It’s finally come to this: software doesn’t exist in some abstract dimension, but comes coupled with devices that a student could learn to program – and see the effects in real-time. Google and Microsoft appeared to be fighting for attention. If you had the stamina and enough coffee, you could go through an entire day toggling between a Google classroom and that of Microsoft’s. Both have well defined Education divisions. (The former made 5 education product announcements at the conference.)

The sessions I liked most, were the Education Playgrounds. These were informal on-on-one or group sessions. I picked several that combined hardware and software. I met with a few Raspberry pi experts, basically teachers who worked with kits that were built around this mini computer.

I was fascinated by the no-frills entry-level kits (starting at the princely sum of $35 an unit!). Why?

First because this hardware was not housed in some beautiful laminated case but was transparent enough or a 3rd grader to understand what a computer was all about. I often need to remind students that ‘computing’ is not some mysterious art form.

Second, computer literacy and digital literacy are joined at the hip today, in the same way that Robotics and the Maker movement can be two sides of the same coin. We need to merge our lesson plans, and get our young Digital Citizens to be Makers, engineers, designers, tinkerers, problem solvers and storytellers to recognize they can each take a piece of this action, and run with it.

FINALLY: I attended a few mind-expanding poster sessions, where the presenters were students. I’ve said it before that no teacher conference would be complete until you have met with students who are after all the reason our schools go to great lengths to send us out to these professional development events. It’s inspiring to see the end product of great teaching, and how underpaid teachers in bootstrapped school districts get students to soar. Many takeaways from these sessions.

Amazon must have quaked at this news today. Google, the folks who have given us Project Loon which will seen create a local Wi-Fi service in countries such as Sri Lanka, is now launching Parachute.

And yes the parachute can deliver anything to you.

There’s a line in the video that goes “Parachutes are like minds. They work best if they’re open.” Hey, minds are like parachutes – they easily catch a passing drift…!

While you’re enjoying it, check out the Google self-driving…. bicycle. (25 years ago a self-driving car would have seemed like an April Fool’s joke.)

To support the recent science and tech workshop, our YouTube channel is up and running.

Google does the weirdest things. It’s my favorite Search Engine, but (and perhaps because) it always messes with its algorithm, there are subtle shifts in how we could search.

The only reason I notice this is because I teach a class on Search Engines and Browsers to 4th and 5th grades. And though they use them the time, many are find it hard to tell the difference between a search engine and a browser –as many adults do.

There used to be a feature known as ‘Advanced Search’ – a dashboard on Google’s landing page, and also Yahoo. Now Google has buried it at the bottom of the site, next to ‘Privacy’ and ‘Terms’ – almost a guaranteed spot to be ignored! It is in a menu under Settings.

This dashboard is a very robust tool, letting you filter results by language, and file type etc. I try to break the habit of students type in any phrase or keyword into the search box, and get them to thing through what exactly they are looking for.

There are more. The tech terms for these are called Search Operators. But a Dashboard for Advanced Search would simplify things. Over to you, Google!