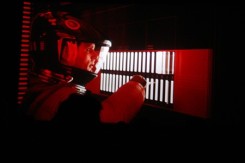 I found this demo quite creepy, but intriguing. It was a video created by a team at the Navy Research Lab in 2011 but is relevant today. A test to figure out how AI could be used to improve “sensor-based” activity between humans and robots.

It’s a plot twist with echoes of “2001 Space Odyssey” in which ‘HAL’ turns off the human life support system, and the human later returns the favor by shutting off the mainframe.

The human here shuts down the robots, Octavia and George – just in case the robot rebellion is pending! The robot uses what is called a ‘multi bio-metrics classifier’ for facial recognition. Maybe I’ve been reading too much of Isaac Asimov lately, so this is quite chilling.