I have to admit the term Polar Vortex at first sounded a bit of verbosity aimed at making a big story out of a weather phenomenon. 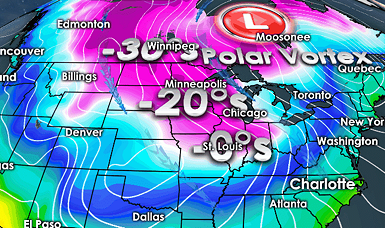 But I did look it up, and find that for once, it is not one of those media marquees trotted out by a TV station’s graphics department.

But it turned out to be a delicious controversy, when good old Rush Limbaugh stuck his tongue out at the equivalent of a frigid lamp-post.  I first picked up the detail in the Discussion Pages of Wikipedia. One Charles Edwin, a Wikipedia editor (biting his tongue, no doubt) left this terse note in the Talk Pages:

“a lot about the media frenzy. Rush Limbaugh, like others, say they remember cold winters and walking to school in massive snow, uphill, both ways. 🙂 Rush Limbaugh is a student of global weather and expects there may be a three-day gap in the cold for Superbowl Sunday.”

Limbaugh called the term something invented by the left-wing media. Predictably so, since Limbaugh makes everything sound like a conspiracy, since that is the jet fuel which powers his craft. Here’s what he said on Monday.

“Now, in their attempt, the left, the media, everybody, to come up with a way to make this sound like it’s something new and completely unprecedented, they’ve come up with this phrase called the “polar vortex.”

To which weatherman Al Roker, threw a nice counterpunch, by revealing and reading from a 1959 college text-book that had the term Polar Vortex defined.

Sometimes these silly spats teach us something, especially about speaking out of turn –with poor facts.

Now if you’re wondering why I would be interested in this the Vortex debate it’s this. I just got back to school today, and as is normal, interrupted my lesson plan to get my fifth- and sixth-grade students to do a project on the Polar Vortex.

As I used to tell people when discussing social media and the oft-contested topic called the ‘wisdom of the crowds,’ poking around the talk pages can take you to down some interesting paths.