More interesting than the  fact that I still have a collection of cassette tapes is what they contain. I managed to play one of them on a not-so-ancient player, and realized it has the edited and raw recording of a program I produced at Broadcasting House at the BBC in London in 1988. 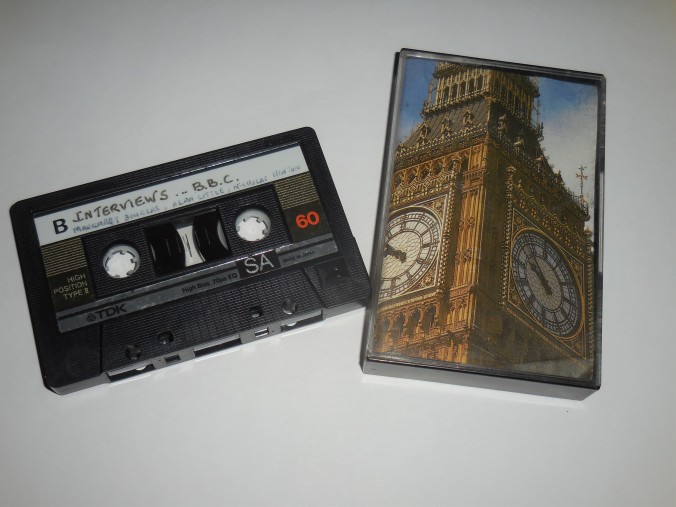 On it are unedited interviews with Margaret Douglas, a TV producer, director and feisty executive during the Thatcher years, who ended up being director general of the BBC. She passed away in 2008. Also there’s one with Allan Little, a well known foreign correspondent at that time, and Nicholas Hinton from Save the Children’s Fund.

But as they say, wait, there’s more! This tape, below archives some work done some years before when I was in advertising, at Phoenix O&M. Our clients’ names are on the tape label. A courier company, a milk-powder and the sugary syrup kept us creatives busy into the night. Driven, of course by persistent account managers who hovered around our desks with 8-page briefs, screaming about a three o’clock deadline.

Between Barnes Place, Colombo and Langham Place,  London the voices and sounds on these tapes are like a time capsule. This week I plan to digitize some of the material to share with my friends. If you’re reading this and are one of those who worked on my team  at the Beeb or at O&M let me know. 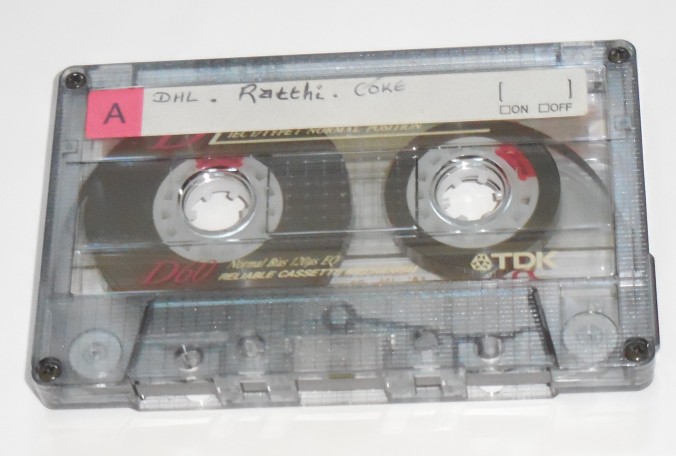 Not only is science fun, it could have a big payoff for students.

This year’s ISEF Fair will be held here in Phoenix from May 8 – 11th. I plan to be there. Interestingly, three Sri Lankan students will be participating in it.

Founded 75 years ago, the fair attracts some 1,700 high school students from over 75 countries, regions, and territories who showcase their research and compete for approximately $4 million in prizes.

One of the winners (left), 17-year old Paige Brown, found a way to filter pollutants in stream water, and has nano-technology in her sights to expand on the device.

This kind of scientific problem-solving is extremely relevant here in the US, where several cities are discovering high levels of lead in drinking water, after the Flint, Michigan disaster. As the New York Times states in its report, “Rules and science are outdated.”

The future generation of scientists and policy makers like Paige will be updating the science. Other students are ‘discovering’ new ways for disease management and medical breakthroughs.

All this while still in school!

Pity the folks entrusted with coming up with a city brand. It’s one of the hardest nuts to crack for a variety of reasons:

If you don’t believe me, Google ‘London Olympic logo” and you’ll see what an identity brouhaha it created for Londoners, and all those experts out there. Even I couldn’t relate…

So to get back to the branding or Phoenix that has drawn fire, one comment from a reader of the Arizona Republic typifies what I am saying.

No money for education, senior citizens, no decent jobs, the housing market crashed …we have a crazy sheriff who uses our light rail for prisoner transport and a bunch of cameras on the freeway for government finances. Does the advertising agency know what a financial risk our state is?

The writer blames everything he is upset about in the state or county, on Phoenix. It’s too easy! Others have called it ‘too aspirational.’ I think much of this ire misses the point. A brand has to be a bit of a stretch, or a bit of reductionism.

No one blames Vegas for NOT coming outright and branding itself as “fake architecture, losers welcome!” now that “What happens in Vegas” has caught on so well to define ‘adult playground.’ If you analyze it to death, as those who slam all forms of branding tend to do, then ‘adult playground’ is a only half the story. But it resonates with what  Vegas visitors accept and expect.

Branding agencies may be expensive, the concept may seem one that an eighth grader could have come up with, and you can’t blame a city for what it is not –not Seattle, not New York, not (who knows) Helsinki.

So my point is, let’s not analyze this new Phoenix branding to death. It sorely needed a refreshing new identity with so much going on there in the past few years, recession or not. As most branding experts say, a brand is what you invest into it. Not the slogan (anyone knows the slogan of ebay?) but the emotional experience.

Fellow IABC member and PR professional, Len Gutman, is one of the first people in the Valley of the Sun  to install solar panels on his roof. It’s an interesting tale of a PR practitioner getting involved in a word-of-mouth campaign with a sustainability edge to it.

SolarCity, the company with whom the Gutman family signed up, had suggested they hold a ‘solar party’ to tell friends and neighbors about the decision. “We thought that was a great idea and so we held one a few weeks ago and more than 50 people showed up,” says Len.

Sort of like a Tupperware party for the planet.

The investment was hard to beat – zero down!  Basically the panels are leased –the Gutman’s monthly lease payment practically offsets the cost they save on their electric bill.

And here’s the kicker. So far, seven of those who attended the party have also signed with SolarCity and the hosts will get a referral fee. Is this great PR for SolarCity, or what?

What happens when the 15-year lease is up? “We have several options – we can have them removed at no cost, we can re-lease them for five more years, we can upgrade to new technology and start a new lease, or we can buy them for the residual value,” says Len. “Just like leasing a car!”

Congratulations to Rachel Pearson, Mary Ehlert, ABC; and BDN Aerospace who brought home Gold. The Gold Quill awards were made at the IABC international conference in New York last week.

“He’s getting his ass kicked.”

“Nothing, nothing, nothing is as disgusting to me as some old CEO chirping away about how things aren’t as good under the new guy as they were under him.”

Jack Welch, on CNBC, making up for his previous criticism Jeff Immelt.

Editorial in Advertising Age about marketers’ attempt to saturate the day with “Hey, look at us! We love trees” type of advertising.

“No happy label on toxic or wasteful product will ever change its contents.”

“Change everything…except for your wife and children.”

A 1993 quote attributed to Samsung chairman, Lee Kun Hee, to his chief executives. He now under government investigation.

“For the iced coffee drinks. Make them with ice cubes made from coffee.”

A consumer-generated idea on MyStarbucksIdea.com, that received 13,050 votes

“Phoenix is sprawling at a rate that seems to rival Moore’s Law.”

For the past year, I’ve been hist by two keywords: innovation and sustainability.

It’s hard not to notice the deliberate attempt by many organizations to tie the two concepts into their marketing, strategic planning and advertising.

BMW says it is “preparing for a Hydrogen future” with “pie-in-the-sky, what-if technology.” Honda has invested in a solar cell company. BP is into bio-fuels. But it’s not just consumer brands that are onto it. The city of Phoenix has a “sustainability blueprint. Tucson has a volunteer-led “Sustainable Tucson” network.

The city of London has a Sustainable Development Commission, promoting community-friendly policies for climate change, education and energy.

It’s tricky to balance growth and sustainability –and getting buy in. At ASU, we wrestle with this all the time. The Global Institute of Sustainability, a block from where I work, does a fine job of defining what it involves, and applying it. Here at the Decision Theater, we actually show organizations what sustainability means by taking their data, and putting it into interactive visualization.

So every time I see ads like the one about building cars out of straw (Toyota) or the Land Rover‘s paying for carbon credits on behalf of the customer, I realize many are only scratching the surface. Once you see how small decisions can change the air quality, water table or traffic patterns in your immediate locale, you’ll see that wearing an eco label requires you to do more than build a neat micro-site, or shooting a great commercial.