Many, many years ago I decided I would no longer support or use Apple products, however ‘convenient’ and cool they were. Most iPhones and Macs before that were overpriced; we as a family decided against them. (My first PC was an Mac. Today I could by three fast PCs for the price of that Mac I owned up to 1996.)

So now, as Apple products come under withering scrutiny, such as the ‘speed throttling’ or battery issue, I wonder why people still put up with a terribly unethical company. There have been plenty of scandals that signaled to customers something was awry  – from the iPad Chinese scandal, to the more recent one that smells of ‘Planned Obsolescence’ (an old marketing ruse).

Transparency is not its strong suit – secrecy is is built into its DNA after all. Including workplace secrecy. But Apple seems to understand human psychology, and knows that a shiny new object is enough to deflect bad business practice. If you read the company’s disingenuous apology, it sounds like it was hammered out by a group of ghost-writers in a tavern filled with corporate lawyers. So while there will be lawsuits and pressure from governments, it could ride this out.

So my question is, if you’re an Apple user do you ‘like‘ the company, and distrust the brand? Or is it the other way around?

How much lighter could phones get?

If you thought the ‘brick phone’ was a quaint monstrosity, consider what a 130-pound phone must have been. And this is what it looked like.

Not exactly for the pocket, eh? 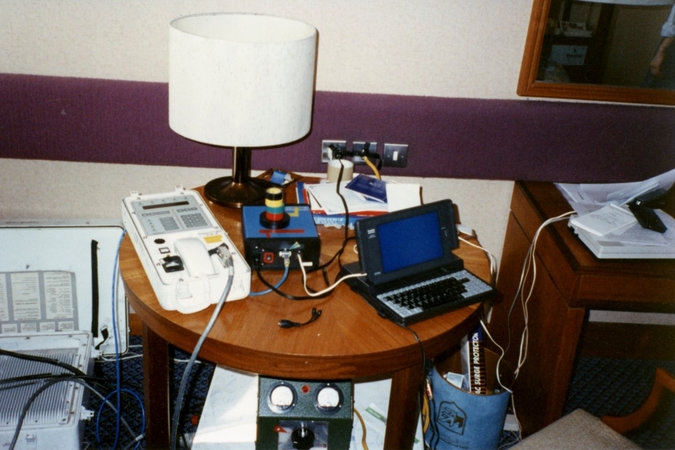 Yes the early global phone, around 1991, comprised a few suitcases for a satellite dish, a transmitter and the handset. Great read by journalist Walter Barranger, of the New York Times who used one of these.

In the same vein, anyone remember using a video recorder that comprised a heavy box in a case with a strap? This was connected by a cord to the actual camera that weighed about 20 pounds.

Or a ‘portable’ computer that was about the size of a small microwave? This was the Apple Color Classic. I feel silly recalling how I lugged this through several airports.

So, did Tim Cook win? Or did law enforcement fight a fake battle over a back-door to an iPhone? A few weeks ago I wondered why they even bothered asking Apple.

Given that there are dozens of websites that provide back-door services, and there being ‘ethical hackers’ who could unlock phones, I’m surprised no one has offered to do it for Apple, thereby freeing them of the PR nightmare.

A lawyer for the ACLU seems to think the battle is far from over. As a friend mentioned in response to this post, this legal tussle could have been a set-up, just to cover the fact that the surveillance program can snoop into phones – locked or otherwise.

But no worries, 60 governments already do it, as reported in Wired magazine two years ago.

Which side are you on regarding the FBI’s request that Apple unlock the phone of a killer?

I lean on the side of the agency because I would want those who protect us to have every possible lock-picking device to thwart criminal behavior. But I can see Apple’s point of not wanting to give up liberty for security, as it could tip the balance when citizens (and businesses run by citizens, never mind if they are global corporations) hand over their freedoms to the state.

Incidentally, that Ben Franklin quote, which must be resounding in your ears about how Those who would give up Liberty for safety deserve neither, is one of the best mis-quoted statements by old Ben. He actually said that “Those who would give up essential Liberty, to purchase a little temporary Safety, deserve neither Liberty nor Safety.”  (Note the qualifiers – ‘essential’ and ‘temporary.’)

What if Apple gives up a little temporary liberty, and stop making a huge thing of this Apparently Apple has unlocked some 70 phones before, but had done it without the media baring down on it. Given that there are dozens of websites that provide back-door services, and there being ‘ethical hackers’ who could unlock phones, I’m surprised no one has offered to do it for Apple, thereby freeing them of the PR nightmare.

Perhaps the government ought to hold a hackathon and see what surfaces. After all, DARPA holds cyber-security hackathons, don’t they?

Steve Jobs wouldn’t have been the serial entrepreneur we knew him to be, if not for his partner in crime, Steve Wozniac.

I make this point to my students, when teaching them the power of collaboration, something lost in our education system that, until now favored the individual over the group; the bubble test over the team project. Common Core standards, adopted by my school (Arizona is one of some 45 states adopting them) urge us to break out of that mindset, and get kids to discuss more, debate, confront, and work as a hive mind.

So I use this example of Woz, where he describes how he stumbled over a piece of fiction about the ‘Blue Box’, and showed it to Jobs. They wondered if this device were possible, but didn’t stop at that. They snuck into a library one Sunday, and looked it up in a stack of journals.

In other words, Steve and Steve were doing their ‘research.’  Something that sounds anathema to today’s kids who like to imagine search = research. That supporting ideas will always be within a few keystrokes or clicks.

I particularly like how the Apple co-founders got started not in a garage, but a library.

Hard to forget, the first PC I ever owned was the Apple Color Classic*.

But apart from giving many of us in advertising and marketing a simple (as in non-geeky) on-ramp to computing, we remember him for his vision, and his humanity.

“No one wants to die. Even people who want to go to heaven don’t want to die to get there. And yet death is the destination we all share…

…Death is very likely the single best invention of Life. It is Life’s change agent.”

I had a great conversation with Brown Russell, former Chairman of Gum Tech (GUMM:NASDAQ), last evening on our radio show.

Brown was behind (and by this I mean he led) the launch of Zicam –the cold remedy, medicine. I didn’t know this but Zicam was one of the fastest growing new cold treatments in recent history.

The reason I thought he would be a great guest was because of a book I noticed on his desk one day. It was one of those thick books on communication that communicators who have just graduated may have not even heard about: The Diffusion of Innovations by Everett Rogers, first published in 1962. (By the way Rogers published 30 books in 15 languages.)

To put this in perspective this was before the Internet was ‘discovered.’ And some of the concepts Rogers analyzed presaged  viral marketing by what, 40 years, maybe?

How do ideas spread and products take off, I asked? Is the diffusion of innovations across networks (the unwired kind) dependent on a marketing and PR push? Derrick brought us a good point –that demand, could possibly be influenced by planned scarcity (as in Apple’s play); by game mechanics (as in earning rewards), and filling the need that nobody has quite recognized (as in Facebook).

By the way, if you occasionally use terms such as ‘early adopters,’ ‘late majority’ or ‘laggards’ you’ve been borrowing from Roger’s theory!

“In the Future, we’ll all have 15 minutes of privacy.”

Scott Monty, head of social media for Ford, on a post about Facebook’s latest move to connect to the rest of the web

“No one is laughing in Arizona. Do your job and secure the border.”

Governor Jan Brewer, in a YouTube video aimed at president Obama, who made a joke about the immigration Bill that Brewer signed into law.

“A lot of great stories are hidden within the public”

Manesh Nesaratnam, Malaysian film director of a movie, Your Grandfather’s Road, which is being crowd-sourced.

“That QR code on the left will even take your smartphone to my Twitter feed. And if you really liked this story, you can re-Tweet too.”

Shel Holtz, referring to the letter Apple, which sent a nine-year-old girl a cease-and-desist letter after she suggested enhancements to the iPod.

“You gotta give him credit for his media manipulation skills.”

Pat Elliot, commenting on a post I wrote for ValleyPRBlog, about the value Sheriff Joe Arpaio holding a press conference to announce he is NOT running for governor.

“We are heartened by news reports that J.S.Tissainayagam appears to have been pardoned…”

CPJ (Committee to Protect Journalists) in a statement on the presidential pardon for journalist J. S. Tissanayagam in Sri Lanka

How could a building or  structural feature send a stronger message about what you stand for than other design elements –web site, brochures, annual reports– you put out on a regular basis?

Not everyone could build a spectacular ‘shrine’ like Apple has, in Manhattan.

At ASU, the Global Institute of Sustainability takes a more pragmatic approach, with wind turbines on the roof generating power, even while solar panels are being installed in other parts of the campuses so as to take care of 20 percent of the total energy.

And speaking of wind power, this story out of London, of designers creating a column of light using wind power is more than a fancy energy project. It demos the capacity of creativity that could be unleashed within the urban planing when you let energy send a message.

In this ‘tower of power’ as it is being called, there are 120 LED’s being powered by a “gentle” wind. Nothing fancy in the set up. A laptop is the only piece of technology behind it, apart from these 1,200 tiny fans. The designer, Jason Bruges Studio, calls it a wind-light.

Maybe someday outdoor signs will be lit this way.

So that, beyond growing lettuce (watch this video!) on the vertical face of a billboard, as McDonald’s did in this very daring/cool design, existing structures could send a passive message, with some “gentle” asistance from the sun, water and wind.

Steve Jobs brushed it off with a slide. He used the Mark Twain line to note that the rumor of his death had been greatly exaggerated.

The rumor, was not a rumor but a publishing mistake –going live with a story that should have been behind a firewall. Bloomberg is not the first to make this new-media error.

But in the rush to do things to meet unforgiving deadlines, to hit the newsstands, and sate the digital newsfeeds, publishing must take these risks. Are we moving too fast, where we might accidentally push the button that could affect the stock price of a company?

Rumors –especially the online kind– are nothing new. United Airlines’ stock was a victim of a rumor just this week, while Yahoo! (temporarily) benefitted from the Microsoft takeover rumor that turned out to be more than a rumor.

Rumor is being slipped into the PR toolbox because it goes well with viral. Recently, there was one about the –ready for this?- Apple Nano iPhone. If you replace “rumor” with “forecast” a lot of this might make sense. The Nano iPhone story was based on a “forecast” using “unnamed sources in the supply channel.”

As we accelerate our marketing, our PR and how we generate news about organizations we represent, news, forecasting and speculating could begin to blur.