One of the long, ridiculous exchanges in the presidential debates last night was on voter fraud, a perpetual conspiracy theory of president Trump. “This is going to be a fraud like you’ve never seen,” he said. 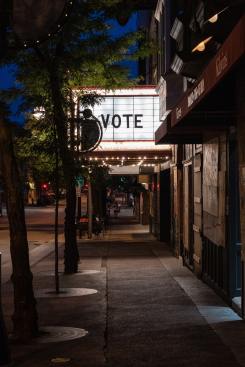 Whenever I see the word ‘fraud‘ in the same sentence as ‘ballots‘ I wonder why software companies haven’t stepped in to fix this.  With some of the best software companies addressing all kinds of threats, whether it’s banking or homeland security, why has ballot encryption been on the back burner?

It appears that the software solution has been in the make-up room, but has never made a grand appearance on stage. About a decade ago, there was a suggestion that we might have ballots that use invisible ink that ‘code’ a ballot as well.

“…instead of filling in a bubble next to a candidate’s name, the voter uses a special pen that exposes a code printed inside the bubble in invisible ink. A voter can write down that code, along with the serial number of her ballot, to later verify the results online.”

Encryption is all grown up now. There is a product, according to a recent WIRED article, called ‘STAR‘ developed out of an initiative in Travis County, Texas.  Benjamin Wofford’s article traces the path of the development, the ‘secure, transparent, auditable, and reliable encryption solution (hence the STAR acronym) of the software.

To summarize it, STAR converts a person’s vote at the voting machine into a ‘hash code‘ that could be printed out and taken, similar to how we leave a grocery store with a receipt of our transaction.  Voter impersonation with this system is very easily detected. The best part is, votes can go back and check or track if their vote has been cast and counted.

It’s about time. We have turned to encryption for everything from text messages and financial transactions. It’s time we encrypt the vote.